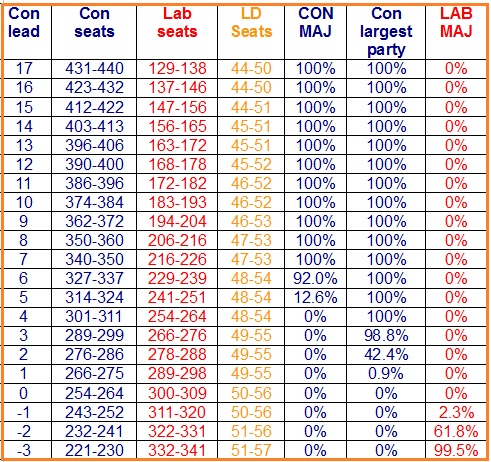 This is the second part of an examination by long-time PBer and statistician, Andy Cooke, into the level of Tory lead that the party will need at the general election in order to ensure a majority. If you have not read Part 1 then read that first before going onto this continuation

What lead do the Tories need – Part 2?

Whatâ€™s the minimum? Well, even if Labour got to a zero-swing scenario, Iâ€™d expect an effective swing towards Cameron of at least 0.2% for a tactical voting unwind barely larger than in 2005, and 0.3% for an unwind of the Blair Effect to the tune of about a tenth of itâ€™s magnitude, merely due to the â€œBrown vs Cameronâ€ battle failing to capture the anti-Tory sentiment for Labour the way Blair could against Hague/Howard. The constituency effect would be unpredictable â€“ arguably it could be at the maximum as the battleground is the one where the peak effect is found, but pessimistically, Iâ€™d start it at zero.

The modelling chosen goes as follows:

So, what does that give us?

The effects were modelled in a probabilistic calculator, with the Lib Dems held at 20% and the Tory/Labour scores swung around the 35/35 mark. The seat ranges are given in a +/- 1 standard deviation figure (so weâ€™d expect the seats to be in the given range 68% of the time. To get a 95% confidence figure, double the size of the range whilst keeping the centre point unchanged)

The results look staggering. A lead of 5 points â€“ according to these assumptions – could result in a Tory majority! Six points and itâ€™s practically in the bag. Another notable feature is the dog that didnâ€™t bark. Look at the Lib Dems. Bearing in mind that this model currently ignores any potential anti-Labour tactical voting in favour of the Lib Dems or Lib Dem overperformance in targeted seats, the score of high-forties to mid-fifties is a lot higher than many people expect. To be fair, the Con vs Lib Dem battle is not modelled, so over- or under-performance in these marginals could have a major effect on the Lib Dem seat total.

It looks too good to be true for the Conservatives. But the entire distortion currently in the system has accumulated due to factors that are going into reverse And the majority of that accumulated electoral advantage is in the seats with majorities between 0-15% – the very seats that will form the key battleground.

Itâ€™s a reflection of just how damn good Labour has been at maximising its vote where itâ€™s needed. Unfortunately, when it lets go, itâ€™s a double or triple whammy back. Every advantage thatâ€™s been cited is one more factor that can unravel. Since 2001, when Labour held a landslide despite the swing against them, theyâ€™ve been fighting the electoral gravity â€“ and doing so with significant success, it must be said

What if you disagree with my assumptions? The solution is simple â€“ if you totally disagree, stick with the UNS predictions â€“ but Iâ€™d suggest that assuming zero tactical vote unwind, zero marginal targeting effect and zero constituency effect is even more controversial than what Iâ€™ve written.

You could take the UNS predictions as one extreme and the above as another extreme and plump for somewhere between them. Or you may decide that Iâ€™m being too cautious and that the effects wonâ€™t just unwind but wind up towards the Conservatives.

A net anti-Labour tactical vote overwhelming last times net anti-Tory vote. That Cameron vs Brown in the marginals will do more than reset the situation to the Major vs Kinnock level â€“ in which case, the effects will be larger than laid out above. Over to you â€¦