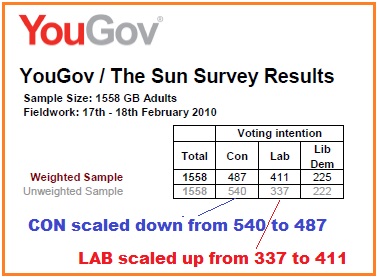 An example of what’s been happening

But WHY are Labour panellists less keen on taking part??

The head of YouGov Peter Kellner has outlined changes that are being made to the firm’s methodology for those on its panel listed as “Labour Loyal” identifiers – those who told the pollster this is the party they identify with and that is how they voted at the 2005 general election.

As has been highlighted here before the on-line pollster appears to have had problems securing the required quota from this segment for each poll with the result that the views of those have have taken part have had to be scaled up. (see panel above from one poll last month)

When that happens there is always the danger that the views of participants might not be representative of all the voters that they are scaled up to represent.

Peter writes: “.. We found that response rates from Labour identifiers were slightly, but consistently, lower than response rates from Conservative identifiers. This was easily corrected at the weighting stage; but, on the principle that the less weighting that needs to be done, the better, we have made slight changes to our sampling frame to reduce the need for subsequent weighting..”

My understanding is that in future a disproportionate number of Labour identifiers will now be invited to take part which should solve the problem. Peter is right that this is a much better option than to do it by weighting.

But this does beg the question of WHY Labour identifiers are less enthusiastic about taking part in the polls. Could it be that that it says something that could affect their voting pattern at the general election

For as several site contributors have highlighted – their reluctance appears to be a newish phenomenon.

Inevitably YouGov, now producing at least five voting intention polls a week, are going to come under a lot of scrutiny because the firm has been consistently recording the highest Labour share of all the pollsters. In some surveys this has been just two points down on the 2005 general election.