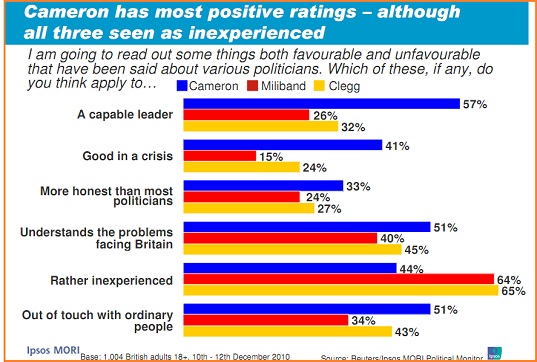 But was the poll as bad for EdM as first reported?

One of the great things about Ipsos-MORI is that their polls are generally accompanied by a mass of data and analysis that go well beyond the standard voting intention questions.

The above chart is from this weeks survey for Reuters and sets out how those sampled responded to a range of standardised questions about Cameron, Miliband and Clegg.

Miliband’s position on most of the measures is basically down to him being far less known that the other two. That will change over time but the reported figures on the overall satisfaction levels are nothing like as bad as the Guardian was suggesting on Wednesday.

It had this paragraph that is somewhat misleading – “Despite Labour’s lead Ipsos Mori shows Ed Miliband, has only a +1 satisfaction rating after three months in office, the lowest in Mori polling for a new leader, apart from Michael Foot, William Hague and Nick Clegg; Neil Kinnock, John Smith, Tony Blair, Michael Howard, David Cameron and Iain Duncan Smith all had higher ratings after an equivalent period.”

In fact the comparative MORI polls from previous opposition leaders puts him in much better light. Hague was 22-28 satisfied-dissatisfied after three months; IDS 24-22; Howard 30-22; Cameron 32-19 while Miliband was at 35-34.

Also the Labour leader’s performance is even better when you take into account the firm’s big methodology change in June 2008 when it stopped doing face-to-face interviews for political surveys.

Carrying out fieldwork in the old way tended to produce much more Labour-friendly figures and Tory unfriendly ones. Before the change Cameron never had a satisfaction level of more than 40%. After the change he never went below that number.