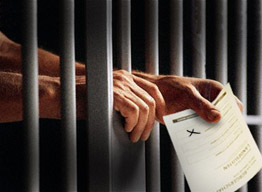 Where will the fallout from yesterdayâ€™s vote end?

If the overwhelming vote in the Commons against prisoners being granted the vote is unsurprising, it is so only because in choosing between reflecting the views of the country and setting up a clash with the European Court of Human Rights (ECHR), they opted for the former despite the can of worms that could open up. In the past, politicians have tended to opt for a â€˜hands tiedâ€™ defence.

In the short term, asserting parliamentary rights against a foreign, unelected and unaccountable body will be a popular move, especially on an issue such as votes for prisoners. Itâ€™s as close to sticking two fingers up at them as it tends to get. However, itâ€™s unlikely to be the last move in the saga.

The ECHR ruled back in 2005 that it is for the national legislature to determine whether franchise restrictions should apply to prisoners and if so, to what extent, that it couldnâ€™t find any evidence that it had considered the question (despite it being a clause in the 1983 RPA), but that it was unlawful to deny the vote to all imprisoned criminals as a blanket application. The Straw-Davis motion obviously addresses the point about parliament not having debated the matter but the main substance of the judgement still stands, presenting the government with a problem.

If it now proposes legislation to comply with the ruling, thereâ€™s a good chance it will fail given the vote yesterday. Alternatively, if it doesnâ€™t act, thereâ€™s a strong probability that compensation cases will be brought on the basis of the ECHR ruling and be upheld by the Court.

Either way, itâ€™s entirely possible to see the government being landed with a bill of over Â£100m for compensation to criminals, some of whom were sent down for very serious crimes (the prisoner who brought the case was himself convicted of manslaughter). That would bring the government into almost exactly the same spot itâ€™s in now – having to chose between implementing a decision of the Court and representing the will of the people. Prevarication would be less of an option as there wouldnâ€™t be the same procedural hoops to go through.

Either road would contain a political minefield. Making payment would go down appallingly with the public and tabloid press and would probably mean having to try to amend the law anyway. Alternatively, refusing to pay would effectively be a contempt of the court and an open declaration that the government could pick and choose which rulings to abide by. It would also give succour to those who would be arguing for complete withdrawal from the Convention on the back of the ruling (and other unpopular ones), creating a political momentum.

The issue of Europe has destroyed more than one Conservative-led government. This case, were it to come to the above situation, may have the potential to do likewise. Nine Lib Dems voted against the Straw-Davis motion – about a sixth of their parliamentary party and a bigger proportion of those not in government. Should it come to contemplating a withdrawal from the ECHR, the pressure from the Lib Dems to oppose the move would be immense – but were they given the choice between abiding by these kind of decisions or leaving the Convention, many Tories would opt for the latter (as would no small number of Labour supporters – hence the previous governmentâ€™s inaction on the matter).

It probably wonâ€™t – certainly not any time soon. For one thing, the wheels of all European justice grind slowly and itâ€™s entirely possible that even were it to come to such a stark choice, it will be after the next election anyway. But issues of high principle are the sort of things that can wreck governments. This is one that might just fit that category and where itâ€™s possible to see how it could bring such a breach if compromise isnâ€˜t possible.