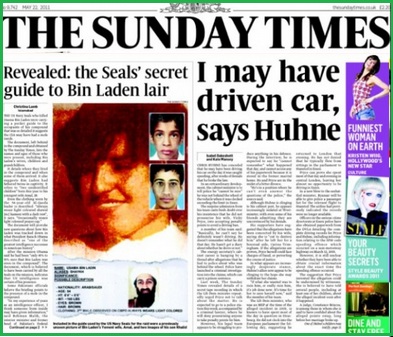 For the 3rd week running he dominates the political news

If it’s Sunday then it must be the latest instalment in the Chris Huhne speeding points affair with the pressure continuing to mount on the resilient Lib Dem energy secretary.

The Sunday Times front page featured above doesn’t look good while inside the paper there is a graphic showing the alleged locations and times of Mr and Mrs Huhne and where the speeding offence happened, with multiple witnesses allegedly backing Mrs Huhneâ€™s version of events.

The Indy on Sunday reports: “…The embattled Energy Secretary is expected to tell police he “cannot be sure” he was not behind the wheel when it was caught exceeding the speed limit in March 2003, according to a report in The Sunday Times. The paper quoted a member of Mr Huhne’s camp saying that he could not remember his movements on the day in question. The source added: “He hasn’t got a diary about whether he drove or not.”

On top of that the Sunday Telegraph carries speculation about a second occasion when someone is alleged to have “taken points”. Huhne’s estranged wife, Vicky Pryce, is said to have told friends “that Mr Huhne not only persuaded her to take points for him – but that he also got another person to do the same on a separate occasion.”

A source said: â€œVicky has been telling people she is not the only one to take points and that Chris had got someone else to do it before her. She has said she will do whatever is ‘necessaryâ€™ and ‘appropriateâ€™ to help the police investigation and that means telling them everything she knows.â€

The Ladbrokes price against Huhne being the next cabinet minister to leave is 5/4.